You are here: Home / Archives for Art Sales 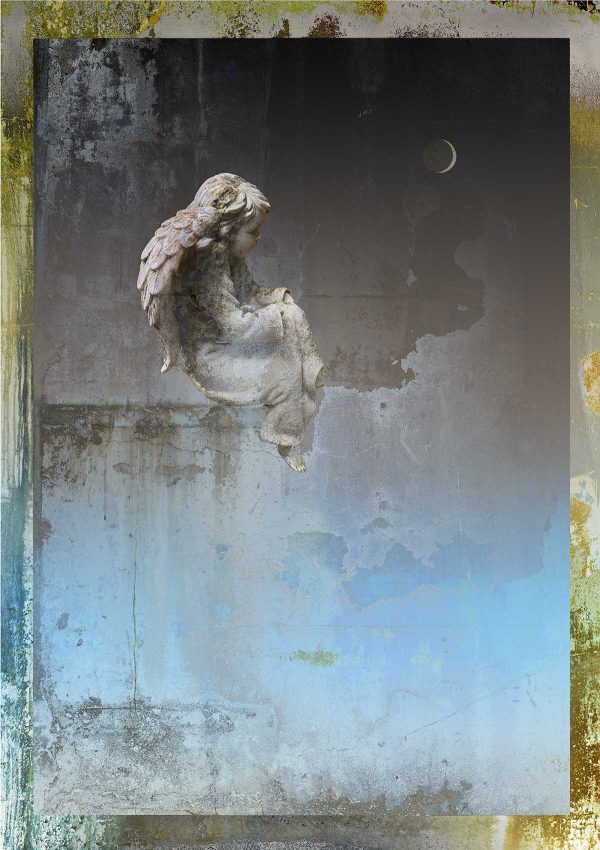 The Story of the Pandemic Angels

In September, the week of 9.11, I took a brief trip to Whidbey Island to escape the smoke from the California fires. For the first day the weather was balmy, with a perfectly clear blue summer sky. I wandered the beaches, filled my pockets with shells, and felt the euphoria of the traveler, a feeling I have missed acutely during the pandemic. Later that night the smoke came in. The horizon vanished, and whether to risk the outdoors became a calculation fraught with hazard. On my last day on the island, restless from being housebound, I went for a morning walk in nearby Woodsman cemetery. The air held a strange amber light, and pink smoke veiled the grave markers at the edge of the forest. I was captivated by the aura of the place, with its moss-covered headstones and weathered statuary dating from pioneer days. As I walked through the dry grass the angels seemed to emerge from the smoke like emissaries from another time. I began to study them and take their portraits.

I am a student of angels, and I had not seen these before. The faces of the little ones captured a blend of innocence and gravity that seemed both timeless and completely of our time. Beauty, grief, mourning, serenity, loss, longing for another time: the combined cataclysm of the fires and the pandemic require a vocabulary all its own. The phrase “smoke elegies” seemed to describe the mood in the air and the bigger moment. I decided then to do a series about the angels, (which got delayed by a journey to Tieton and the beginning of a photographic series of landscapes of the America West – but that’s another story!) Perhaps it is the coming of December, with its dark weather and mystic illuminations, but I woke up a few weeks ago possessed by the image of a winged statue. I decided to drop everything else on my plate and see where this body of work might go.

The archetype of the angel is far from my usual subject matter. Angels for many evoke religious associations, and as a result, for a contemporary artist it can feel precarious to go into this territory. For me angels do not represent religion, but instead act as a universal icon offering comfort, protection, rescue and transcendence. Their form is a devotional shape into which I can pour the unironic emotions of this time of isolation and worldwide loss. The pandemic has taken nearly 1.5 million lives world wide, and for many of those deaths there has been no ceremony of mourning, no bedside visitation, no funeral. A cemetery and the sense of ritual that accompanies it looks very different in the light of this new reality. 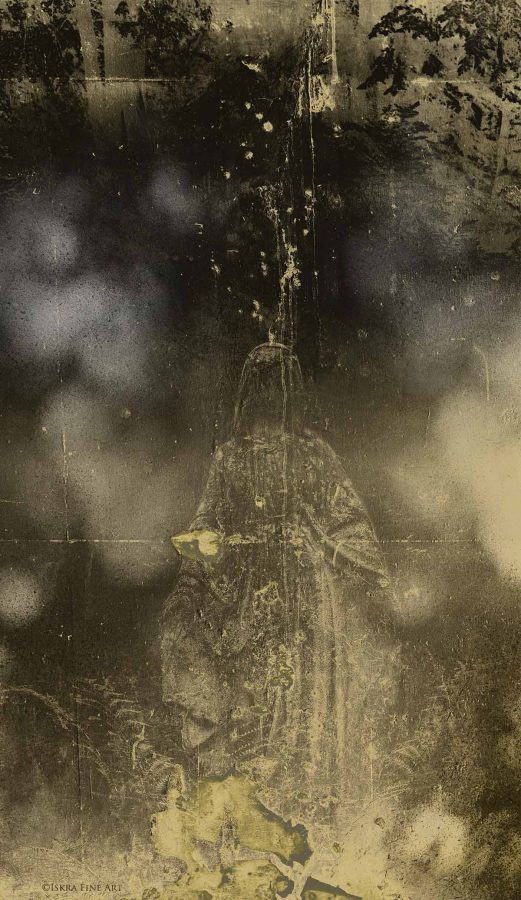 Working on these images has been a contemplative and personally transformative process. The angels are built from a slow, painstaking method of collage that has led me on a path to rediscover what it was I saw in the smoke, at the edge of the woods. In the process I have researched the pictorial treatment of angels and marveled at the long fascination they have held for people through history, from ancient Crete to Victorian England all the way up to today’s video gamers in VR headsets. Some of these pieces reference the mourning theorems of American folk art, and others the shrouds of Faiyum. Others embrace Victorian intricacy and that era’s unabashed romance with sorrow. As I have been living with the faces of the angels I have also been living with history, and putting the present difficult moment into a deeper sense of time. 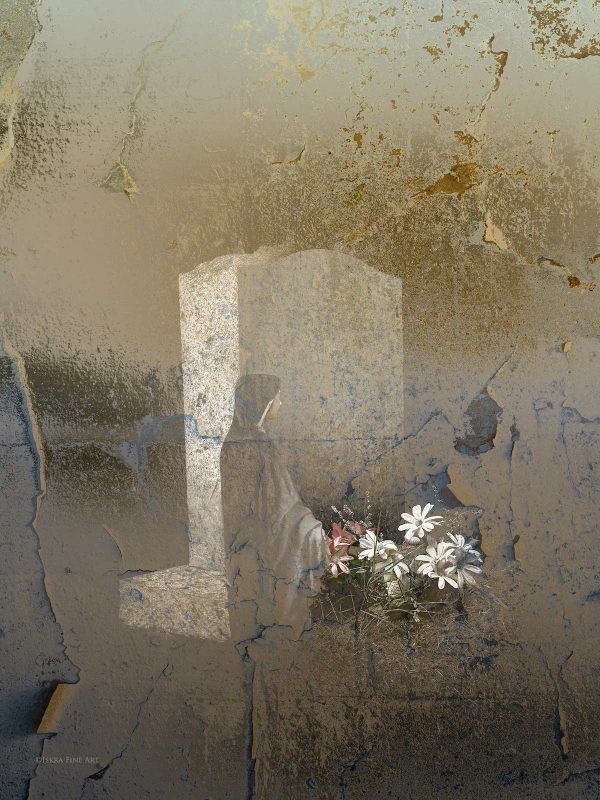 Devotional practice often focuses on one image and repeats it again and again. In my years as a calligrapher and student of Buddhism I might do one character from the Heart Sutra for weeks. In that tradition, I have chosen only a few images, and worked with them in sequence, finding more to understand each time I look at subtle differences in color, texture and context. The result is a series of prints in variant editions. They are created through my unique process of digital assemblage, built up with layer upon layer of subtle surface and color from my photographs and ink painting.  All of the prints are available in my shop, in a variety of sizes and prices. For the holiday season, everything in my shop is 20% off through January 2nd with a minimum purchase.

The collection to date is included here, as the resolution for retina display on WordPress is best in the blog rather than the portfolios. Click on any image to be taken to the listing. 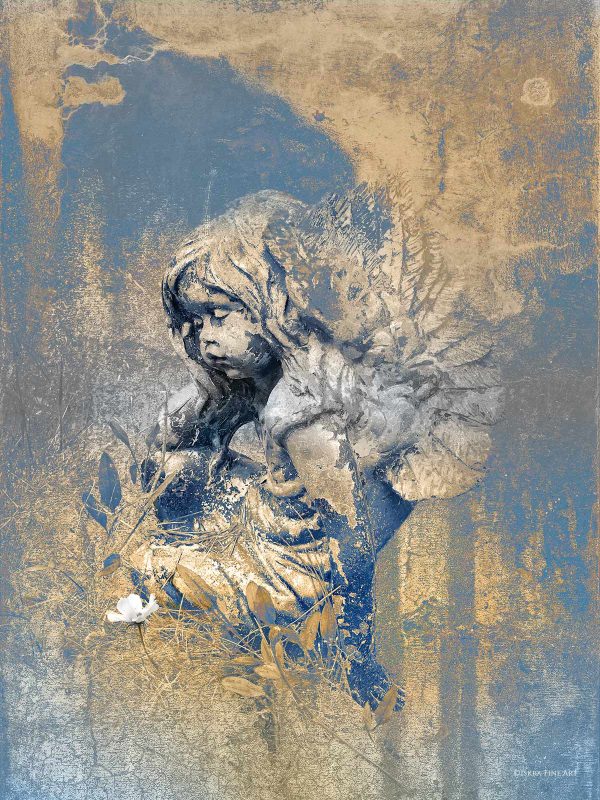 Good news here in the pandemic closures during November! Because SAM Gallery and SAM Shop are both considered retail, they are open now through December even though the museum is closed. No ticket is required, making it easy to shop local and support Seattle Artists and craftspeople. Hours are 10-5 Monday through Friday, with entry on First Avenue. 206.654.3120 for more information. You can also order and shop online. Art in the gallery is available to purchase, rent or rent to purchase, with pricing for every budget. Sixty artists are represented at the gallery, in a wide variety of media and styles, and the list includes many of the Pacific Northwest’s finest painters and image makers. Click on the list below to go to the gallery inventory page.

I urge you to support the Seattle Art Museum and local artists and creatives this year in any way you can. The holiday season is when many in the creative community make the majority of their income for the year. Without crafts sales or open houses due to the pandemic, many artists will struggle to stay afloat. Every sale at the Seattle Art Museum supports both the artists and the museum itself. Let’s make sure when the city re-opens after the pandemic closures that we have a vital creative infrastructure. Every bit of support you offer now will ensure the future cultural life of the city!

It might have been enough to face off with a pandemic. But the center does not hold, “all that is solid melts into air,” and across the world cities are aflame with protest and an expanding movement for social justice. As structures of order crumble, as statues are de-platformed and sprayed with graffiti, as the jails and hospitals overflow, we huddle in isolation, transfixed by news that is alternately exhilarating and disturbing. Can you blame a person for looking for something to hang onto?

In the chaotic urban environment, the water tower shines for me as a beacon. I think of it as the German Shepherd of architectural structures: noble, tastefully proportioned and faithful to its purpose, which is to gather the heavens in a bucket and gift it back to us glass by glass. It sits high atop the city, merged at times with the clouds, and calling down from the heavens a very practical benediction. It is a usually hand crafted vessel, built from wood, using a method little changed from the 1800’s. Water towers are rarely defaced by graffiti, but any totem of neutrality invites our projections.

The Water Tower Project looks at this iconic structure from many different perspectives. In some cases I have located the tower in an imaginary landscape, complete with horizon line. At other times it serves as an emotional vessel to express the clamor and heartbreak of the streets. I am offering this series through the #ArtistSupportPledge, which is a global initiative to broaden the circle of art appreciators and create a circle of generosity. The first two prints in each edition of 35 are priced at $150, half the usual price of $300. When I have earned $1,000 from the sales I will then purchase the work of another artist for up to $200. At the end of this post you will find the collection of 16 gathered as a jpg that may be downloaded for reference. In the week since I have been posting these to social media I have sold three, so if you are interested in the PandemicPrice you may want to move quickly. The blog software allows me to show images at their best quality, so I will post the entire set here (click below the fold) for the time being rather than my portfolio. I am offering these through direct sales rather than through my shop, so please reach me through email if you are interested.

Each Water Tower has a story, and if you are interested in the narratives I suggest following along on Instagram.

END_OF_DOCUMENT_TOKEN_TO_BE_REPLACED

Since the pandemic lockdown began two months ago I have been working on a series of drawings. The original impetus came from my ongoing project, #100DaysOfTheSpaceBetween, introduced last month. Although the project also involves photography and other media, I decided to use drawing as the foundational practice. In this strange time, cut off from family, friends or social contact, I have sometimes floundered. The isolation of confinement has thrown me into emotional states surreal in their intensity, and the quiet absorption and focus of drawing has become a calm oasis in my days.

As the solitudes of the pandemic have segued with shocking speed into the pandemonium of a June aflame with flash grenades and tear gas I have questioned, as many artists have, the relevance of their art in this time. Social media demands a simple story, an allegiance to one side, and the embrace of slogans with no nuance. I reel in horror at the videos of George Floyd’s murder and wonder if I should drape a black tarp over my Instagram account? For how long? Do I stand with the rioters? The protesters? The police? Or is it possible to stand in a place where I can see from all points of view? Who gets to decide?

END_OF_DOCUMENT_TOKEN_TO_BE_REPLACED

“Wish.” The last in this series revisiting the

I am excited to see @cathysarkowsky launch the Vas

“At the Edge of the Woods,” is a portrait of t

Whidbey Life magazine is going to feature the ange

I just posted my artist journal of studio processe