My art practice is rooted in the traditions of contemplative art, influenced greatly by my years as a student of Asian calligraphy and my design career as a calligrapher and letterform artist. I use many different media, but in all of them I am very attentive to the language of mark-making and surface. As principal of Iskra Design I worked with the alphabet for many years, providing custom letterform solutions for book covers, logotypes, and package branding. In the first decade of my career I immersed myself in Asian calligraphy, haiga, T’ai Chi and sumie painting, studying with Lucy Liu, John Leong and Sensei Ishii among other teachers. After this period of Eastern influence I went to the University of Washington, completing a degree in painting with a secondary focus on printmaking (BFA). I draw inspiration from the interplay between the contemplative practices of Asian art and a perhaps more Western need for invention and uncharted chaos. 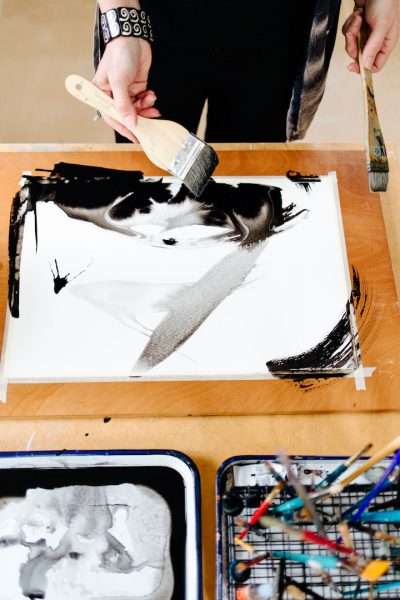 I bring my background in calligraphy into all of my work

Although my first love is printmaking, due to early exposure to solvents I have been unable to work in a traditional printmaking studio or with oil-based inks, and this has pushed me to devise my own methods to create the look and process of printmaking without a press. In much of my work I approach my surface as though it is a stone or metal plate, but the “plate” becomes the final piece of art, reflecting the same characteristics of mark-making found in etching and lithography. I love surfaces that are bitten and etched, indirect and calligraphic mark making, and experimental processes of monoprint which embed an element of surprise. I also adore flat screaming color and the graphic qualities of serigraph and stencils. I move between visual languages, always looking for an ambiguity of pictorial space and unexpected juxtapositions. For the past five years I have focused primarily on how the atmosphere of emotion intersects with architectural structure. In my series about construction sites and the street I use contemporary digital photography, imaging software and found and made surface to explore nostalgia, loss, place and displacement in the rapidly changing urban environment. For me Photoshop is like playing jazz: it is the ultimate tool for improvisation. It allows me to deconstruct images into layers of light and color, line and shape, and reassemble them into imaginary worlds. The way the layers interact with each other opens up a new kind of pictorial composition unavailable in any other medium. The physical form of my digitally composed work may be archival pigment print, transfer print, or mixed media. In digitally printed work my goal is to produce a work on paper, an artifact incorporating all the finesse and obsession with surface of traditional printmaking. The resulting images have a mysterious hybrid quality that is often taken for silkscreen or lithography. 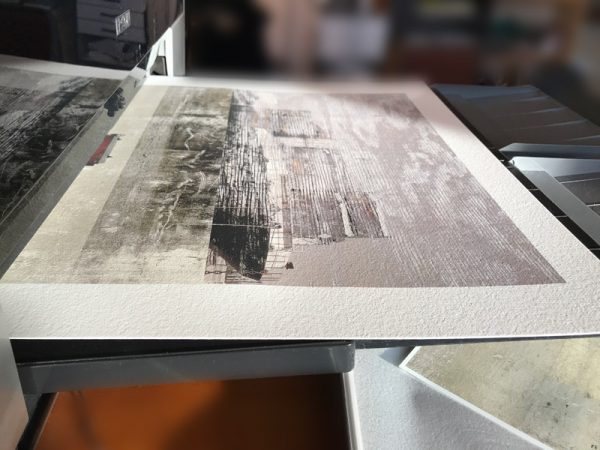 German Etching, my favorite paper, beloved for its rich surface and the way it holds ink.

Recently I have begun a shift away from printmaking towards more direct processes, using mixed media on Venetian plaster and pure painting. In going back to what are in some ways traditional image media I am still very interested in what I think of as “photographicness.” This is a relatively modern phenomena, in which photography, which originally set out to imitate life and “painting from life,” has now become our visual reference point as a global culture. How does a way of seeing that is mediated by incredibly complex technology enter into our psychology as a collective/yet personal emotional filter? How does it influence our sense of what is “real,” “personal” or “authentic?” How do the qualities of surface in the daily interface of screens, phones, camera and facsimile begin to define what is beauty in other media? These are some of the questions guiding my work. If you are interested in a studio visit or in purchasing prints or paintings you may write to me through the contact form in the navigation bar or email me at iskra (at) iskrafineart.com. My work may also be seen and purchased through Seattle Art Museum Gallery. 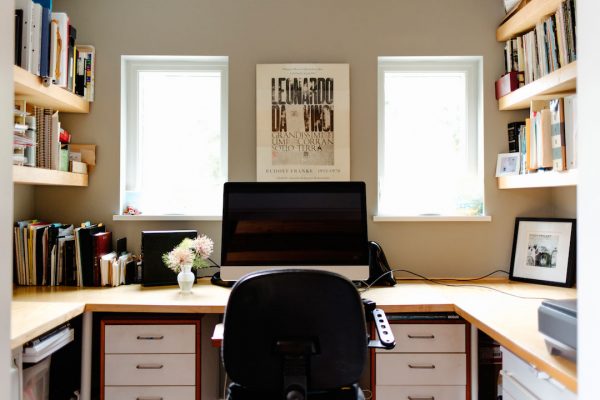 My office, where the digital alchemy happens.

2016     Tech and the Democratization of Art, Galvanize, Seattle Washington 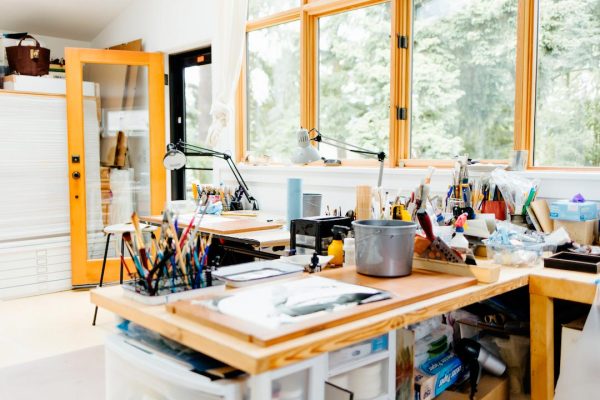