You are here: Home / Archives for Iskra

This July I made a visit to the exhibit of Monet at Étretat at SAM, and came away affected by it in ways I could never have imagined. Of all the art movements I have studied and learned from, Impressionism is my least favorite. As a student intern in the 1980’s I was assigned to guard the Henry Gallery’s exhibit “American Impressionism,” and this may have played some part in my disaffection. During those months I leaned against a wall for hours staring at a painting of blurry women in bonnets and skirts sailing down a dappled river until the entire art universe seemed to condense into one long sugar high of cotton candy. Even though it was the height of the women’s movement (or perhaps because of it), I found myself rejecting most of the exhibit, and with it most of what was commonly identified as “Impressionism,” for its “femininity.” There was a sense of stifling romance and bourgeois comforts that seemed completely alien to my own experience and to the times. Instead, I found my heroes in the Bay Area painters like Diebenkorn, Nathan Oliveira and David Park, and graphic artists like Ben Shahn. When I worked with figures I wanted to be as crudely elegant as possible, with as few strokes as possible. “Romance,” or “the Feminine,” if acknowledged at all, was hidden behind layers of denial.

Add to this the factor of replication, and how hard it is to see a famous painter’s work freshly when it is reproduced on coffee coasters and umbrellas and shopping bags stretching out into infinity. I associate Monet with product, with an endless funnel of pink and white lilies and blue haystacks, and I have not looked at his work live in a museum in decades. Stepping into the intimate darkness of the SAM show was a revelation. Much of the exhibit is about context and history, and this sets the stage for the burst of color in Monet’s work that greets you at the end. Early impressionists were also collectors of photography, and the exhibit begins with a series of photographs that show the beginnings of influence between the mediums. The tiny albumen silver prints by Louise-Alphonse Davanne are mesmerizing. These images have an uncanny power relative to their size, and they transported me instantly into the middle 1800’s. I felt like I could smell the air and feel the sand of Étretat under my feet. At the same time the juxtaposition of the capstans with the cliff seemed completely contemporary, (and directly connected to my own obsessions with industrial structures, a comforting through-line across the centuries.)

The SAM exhibit includes a dozen paintings by Monet’s contemporaries. Although I regret to say I did not fall in love with Monet’s works, I did fall in love with Corot and Boudin, and in particular Corot’s handling of figures. One painting, “The Beach, Etretat,” (first image above) got me thinking about my own medium in a different way. With a few glaze-obscured strokes Corot describes a woman and child in a way that is timeless, accurate and completely abstract in its brevity. I came away wondering what I could do with figures in the mixed media of paint and photography that could speak to that image and how it burned into my mind. And Monet? His influence was the purity and alchemy of color itself.

For the next few days I walked out into the world with my camera and a new eye, asking myself what is “photographic impressionism?” How do you walk the line between romance and realism, nostalgia and now? What do we avoid when things are out of focus, and what do we see more clearly? At Golden Gardens, along the waterline, I found the same people of 1850’s France, but with less clothing. In the first weeks of being able to go out without masks, and with the sudden appearance of sun, there was a sense of wonder and euphoria at what, in summers past, would have been ordinary. I experimented with shooting scenes blurred and in focus, at low resolution and high, and back in the studio blended painted surface and various degrees of documentary accuracy to see how this changed the emotional content. How could I, in other words, find my version of Corot’s woman and child?

END_OF_DOCUMENT_TOKEN_TO_BE_REPLACED

As we emerge from the pandemic into summer I have good news to report: Seattle Art Museum and SAM Gallery are close to fully reopening! I will be part of a group show in late summer with two other printmakers, Tallmadge Doyle and Jueun Shin. In conjunction with SAM’s Monet exhibit the theme will be water, which I am guessing you may welcome after what could be some very hot months ahead. As post-pandemic plans finalize it is best before visiting to call the gallery and shop (206.654.3120) to learn the latest updates on procedures. At this point access is available Wednesday-Sunday 10-5 without a museum ticket, although the museum website does not yet reflect this.

Water is also the theme of a piece selected for the exhibit Art in the Time of Corona, which features my piece “Ledger” on Artsy.  The goal of this innovative project is to record and exhibit defining artwork created during civil uncertainty. The hope is to unite viewers and help them find the sanctity, comfort and inspiration needed to heal a world in turmoil.

Over the past six months I have been sorting ideas and directions and keeping my studio practice focused on process. Printmaking has been a throughline of all my work for decades, and as part of my year of media exploration I decided to take one more look at “old fashioned” printing with a press, using water-based Akua inks. With help from an associate in Seattle Print Arts I set up my Baby Richeson press, which has been sitting neglected in a dark corner for nearly 20 years. It was mesmerizing to combine the folded paper collage I started doing earlier this year with the press, and I often found myself printing until 1 or 2 in the morning, experimenting with drypoint, monoprint and various forms of chine collé. Very few of these pieces will ever see a public wall, but the interplay between developing ideas in drawing and watercolor and then moving to a the press will be useful for years to come.

END_OF_DOCUMENT_TOKEN_TO_BE_REPLACED

It has been a full season since I last wrote here. I dimly remember a dark winter, (are my socks still damp?) with sunlight rationed as though WW2 never ended. Right now, mid April and 70 degrees, we have an armistice: the bamboo is incandescent in sunlight above the pond and the towhee is singing his one song which is “towhee, towhee.” Annoying, but reassuring, as the song means “here I am, being myself, as usual, and by the way thankyou for not over-pruning the laurel hotel because we really like that leafy wallpaper. Is it British?”

What a relief! We got here! Eggs are being made and laid, the vaccine is working, and someone came for a toasted bagel in my kitchen today: we ate it unmasked, with butter! (I don’t know if it is possible to put too many exclamation points after the buttered toast….)

The little very small things make me very happy. 12 months of pandemic have wrought changes. I have found myself gravitating to the size of the page, an intimate space where art is not performance, but conversation: The missing intimacy of whispers and histories traded and notated in the margins; old books, primers, notions catalogs from St. Louis, 1923, the Seattle Telephone book 1947.

In this year the present has seemed indefinitely suspended, and I’ve been going back in time. One restless afternoon I stumbled onto one of Seattle’s last antique stores, soon to be leveled for condos, and began documenting it with my camera. Somehow, in the act of filming a book’s pages as I turned them, words lifted from the page and became sound. On my last visit there I came

END_OF_DOCUMENT_TOKEN_TO_BE_REPLACED 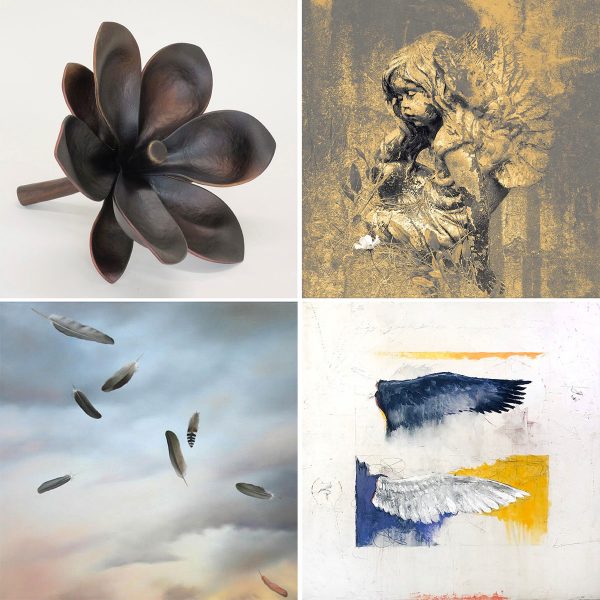 I am excited to be part of A WING AND A PRAYER opening at Museo Gallery January 20th, with artists Elena Korakianitou, Michael Dickter, Faith Scott Jessup and Jean Whitesavage.

“A celebration of our ultimate optimism for our world, our embrace of transformation, and a recognition that we may need a little divine help along the way.  Opening on a significant day both politically and astrologically, January 20th,  Museo hopes that this show will encourage peace and hope.”

Museo is open 11-6 Thursday through Monday.
Tuesdays & Wednesdays by chance, or by appointment.

The show will continue through March 1st.

I will be showing my recent series of limited edition images based on statues of angels, some available framed or mounted on panel, and others available unframed at the gallery or through the Gallery website. The language of statues is one of many ways I’ve explored the distance between sky and earth. This piece, a variation on the myth of Icarus, will be available at the gallery to see in person.

If you have the time to make a day of it I suggest a walk on Double Bluff. Eastern clouds may take their shape from the land, but island clouds listen only to the sky. 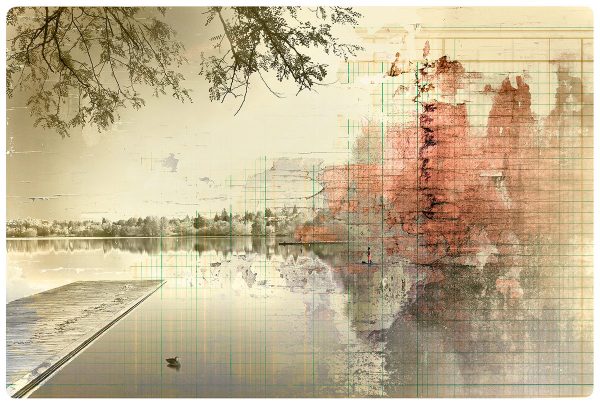 For years I had a ritual of sewing on New years Eve. I had an actual woven reed basket, knee-high, and in it was a stack of clothes going back, and back . . . to the first threadbare jeans and the first embroidered patch on a knee in denim in the 8th grade. (I think I stitched a rainbow when I was 13, remember those?) At the bottom of the basket was a clown my mother made of socks and Mid-Century Modern fabrics, split down the middle between black and white and color, a harlequin icon of her day, when a housewife had a choice of valium and the vacuum cleaner or dancing to Chubby Checkers in the afternoon and writing letters to the editor. I never could figure out the sock part. END_OF_DOCUMENT_TOKEN_TO_BE_REPLACED