“The cradle rocks above an abyss, and common sense tells us that our existence is but a brief crack of light between the eternities of darkness.”

“Come with us by all means, but do not chase butterflies, child, it spoils the rhythm of the walk.” — Speak Memory, by Vladimir Nabokov

When I was invited to participate in the exhibit “Ex Libris: 100 Artists, 100 Books” I had no question about which book I would choose to interpret. Vladimir Nabokov’s Speak Memory: An Autobiography Revisited has murmured in the back of my mind for twenty years as an unsolved koan. In my work as a book title designer I have designed a dozen hypothetical covers as portfolio exercises, and always I felt I could do another hundred without exhausting the timeless incantation of the words. I knew that this time I wanted to focus on shadow and light, the beauty of sensory experience and tactile surface. Not only did Nabokov write some of the most evocative and sensual literature of the 20th century, but he made his mark in lepidoptery as a passionate and obsessive collector of butterflies, with an entire genus, Nabokovia named after him. It seemed to me any homage to the book must also include a butterfly, and more than that, a re-enactment of the chase.

We can no longer blithely step out into a field of wild flowers and find a butterfly at whim; I have only seen three in my garden in the past year. In lieu of this science offers us the Tropical Butterfly House at the Seattle Center,  where I could wander in the middle of December and collect specimens with my camera. Similarly, for years I have been collecting shadows, and with chlorophyll and pins and camera in hand I set about to capture from new days and old archives the perfect juxtaposition of light and dark. I have always loved the indirect but powerful effect of shadows as characters off stage. They shift and blur without our control and change in an instant, and they invite a compositional element that reflects the fleeting certainty of memory.

“… my Swallowtail, with a mighty rustle, flew into her face, then made for the open window, and presently was but a golden fleck dipping and dodging and soaring eastward, over timber and tundra, to Vologda, Viatka and Perm, and beyond the Ural range to Yakutsk and Verkhne Kolymsk, where it lost a tail, to the fair Island of St. Lawrence, and across Alaska to Dawson, and southward along the Rocky Mountains — to be finally overtaken and captured, after a fourty-year race, on an immigrant dandelion under an endemic aspen near Boulder.” —Speak Memory

I knew that I wanted to create an image of evanescence, but also something that had physical presence and some aspect of dimensionality. I experimented with image transfer, physical collage, and plaster. I arrived in the end at a very different approach to physicality. The images are collaged in Photoshop with the transparent immateriality of thought, but are mounted as specimens might be, on panels, and glazed with layers of acrylic resin as though encased in a vitrine. The quiet typography and shape of the panels reference both a tombstone and the original division, the abyss, of the opening lines of the book.

For readers with interest in the technical aspects of this, I will say it wasn’t easy. Although I made dozens of tests on small panels with adhesives and with acrylic resins, when it came to the final full scale piece all kinds of problems appeared. Who knew gluing a piece of paper onto a piece of wood could be so tricky? Piece of cake if it is 8 inches, but at 16 inches it was hair-raisingly difficult to center the image with just the right amount of border to later trim and sand off. I learned the hard way that it is a good idea to place a thick towel between the paper and a hard surface while drying with weights. If there is a slight warp in the panel the towel will help to fill in the indentation and ensure that all of the paper makes contact with the glued board.

If you have a concern as I do with the archival treatment of digital collage, I pass along here my mistakes and discoveries. I tried Golden’s UV sprays first, and they left a pebble pattern that no amount of subsequent resin could hide. I then tried brushing on a thick coat of Golden UV Topcoat, and the brush strokes caught light and got in the way of a seamless surface. I discovered that if I diluted the Gel with about 30% water and used a sumi brush with a feather-light touch I could do two coats of sufficient depth to protect from UV rays, and still have a lovely surface that bonded well with the next layer. I use only archival pigment printers, (the Epson 3880 or a Canon) which do not bleed with water, so diluting the Gel is not a problem.

For my final coats I used two layers of Golden GAC 800. I have seen the application demonstrated with brush, but I found that if I poured it far fewer bubbles appeared–and contrary to the specs that say it won’t craze, it will if it is poured too heavily. One or two light coats work best. They will look milky, but if you stand on one foot and watch for five hours you will be pleasantly surprised. This beats watching the space bar fill on your computer, and adds some drama to life. To deal with bubbles, do tests using isopropyl alcohol: spray-mist immediately after the pour is done. I have tried several formulations of alcohol, and unfortunately, they are all different, and some will leave pits in the surface. You have about two minutes to lift random butterfly dust or eyelashes out of the surface, but after that you will find indentations form and appear about 24 hours later. Do not wear a black fuzzy sweater.

The Ex Libris exhibit is the brainchild of artist, curator and entrepreneur Siolo Thompson. It is being held in conjunction with the Association of Writers & Writing Programs being held in Seattle this February 26 through March 1. A selection of works from Ex Libris may be seen on exhibit at the Seattle Convention Center during the exhibit. See the entire exhibit opening First Thursday March 6 at Axis Gallery at 308 1st Avenue Seattle, 98102. And for previews of the work if you are interested in purchase, contact Siolo at siolo.thompson at gmail.com.

A last word from Mr. Nabokov:

“‘Natural Selection’ in the Darwinian sense, could not explain the miraculous coincidence of imitative aspect and imitative behavior, nor could one appeal to the theory of “the struggle for life” when a protective device was carried to a point of mimetic subtlety, exuberance, and luxury far in excess of a predator’s power of appreciation. I discovered in nature the non-utilitarian delights that I sought in art. Both were a form of magic, both were a game of intricate enchantment and deception.” 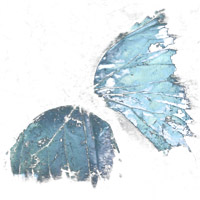 Some quick snaps around the studio. Rains are comi