You are here: Home / Recent Posts / New Art from The Garden, or, How I Learned to Get Over Myself and Love Flowers

What kind of fool plants flowers in late July, when the temperature is scalding and the dirt has become so dry it has closed like a fist and refuses even the longest kiss of the sprinkler? That would be someone who comes late to the love affair of flowers, someone who held out until the last minute against their invitation. That person would have said, “I hate orange and pink together.” “Flowers are banal.” “Flowers are so obvious, and they have no bones in winter. I’m a winter person.” And lastly, “Flowers will break your heart.”

This is very true. Just now I have been standing in the pungent dust with my garden hose wondering how many more times I will have to water the ailing flock of pink cosmos and orange rudbeckia until they stop falling over. I have snapped off countless dry husks from the daisies as I embrace the ruthless ritual of “dead-heading.” I have wept at the delicate hydrangea that refuses to thrive no matter how much shade and water and worry I offer. Yet every time I open the front door my heart is flustered all over again by the canna, the petunia and the dazzling blue lobelia. True: your heart breaks, again and again, but that doesn’t seem to matter once you fall into this kind of love. 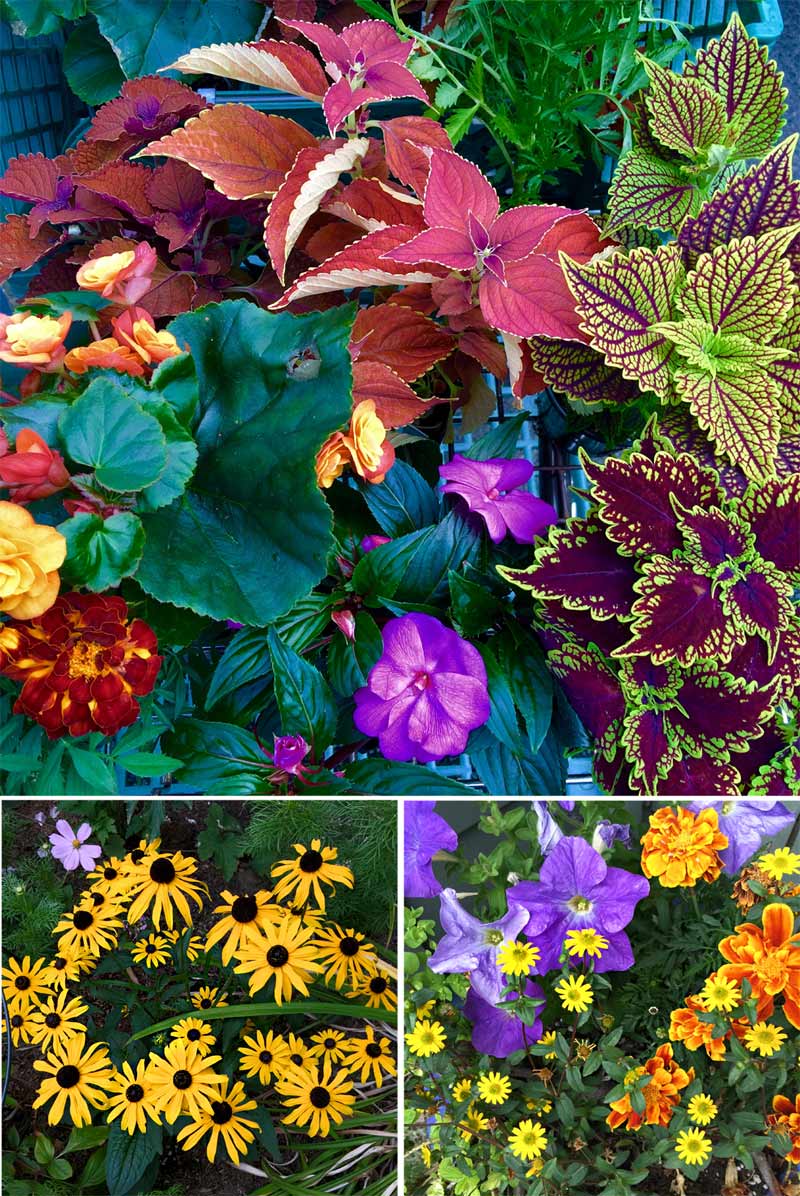 My birthday comes in September, and as I have gotten older I do not look forward to the month with happiness. Rather, around mid-July, I start to feel the elegies coming on, and brood upon the tipping of life. Which little acre of my body has changed this year, and can’t be moisturized and vitamized back to its former glory? Why does each summer seem shorter and each Autumn gets here before I put away last Winter’s clothes? As I sort through family histories, which life-span will be mine?

When I was in my 20’s and 30’s I was so generally rude, and sure of the order of things. Flowers, for instance, were for “old people:” the grandmothers. I had several of them, although few were blood relations. In the modern way of things they were the mothers of step-fathers and step-mothers and not much invested in the earlier progeny that came before their ‘real’ grand children. I kept my distance, and the pretense that they also were ‘unreal.’ What surprises me is that though they have been gone for decades, the grandmothers are more with me now than when they were alive. If I believed in heaven I would say they dusted me with pollen from somewhere up in the clouds. How else can I explain swooning over roses? Or filling my back garden with fuchsias, when for years I spoke condescendingly of “those gaudy tasteless screaming things” my country grandmother kept in hanging planters. I thought of the word “fuchsia” as too much lipstick. Now I live for the flash of the Anna’s hummingbird, which can’t resist those hopelessly garish purples and reds.

Lately I have been thinking a lot of my city grandmother, whose name was Grace. I think she was born old, with a hairnet and nylon stockings rolled up to the knee, and faded flour-sack dresses and glasses with a line across the middle. She was, in fact, about my age now when I met her. (Pause, to think about that. Take off my glasses, and experience gratitude that the horizontal line doesn’t show. . . .). Grace was known as “the flower lady of Greenlake,” and on her double lot she grew a riot of dahlias, chrysanthemums, roses and gladiolas, while providing a summer-long harvest of berries for pies from a tangled arbor in the back. When we visited on Sundays we returned home with arms full of flowers and a week’s supply of cinnamon rolls, cookies and jam. On the Fourth of July we would walk from her house to the lake to watch fireworks, and in my mind the chrysanthemums and fireworks blend into one bright sun rising up and exploding into the sky.

Grace wasn’t vain. In the life she led before we met she came west in a covered wagon, she taught in a one-room school-house, and she worked on her feet for thirty years selling clothes at a department store. And then, when she retired, instead of brooding on having been born before the 1900’s began, or fretting over the latest crease in her face and spending her hard-earned retirement on anti-wrinkle cures, she looked out at her garden. She planted and weeded and harvested like the pioneer stock she came from. She didn’t try to “design” a garden using textures and color families of different greens. She just put stuff in the ground and it came up miracles.

I don’t know if Grace would laugh at me, with my fancy cultivars of hellebores and ‘heirloom this and that.’ She would definitely laugh at the zucchini that won’t fruit. But I think she would admire the (volunteer!) scarlet runner bean that has nearly climbed over the roof of the house, and she would have some special and equally ordinary way of making a carrot grow longer than an inch. If I squint I can see her here, kneeling at the edge of the beds in one of those dresses covered with the faded bouquets of pansies and the cotton so soft it must have been washed a thousand times. We would have nothing to talk about but flowers, and that would be just fine.

A new botanical piece has been coming together in my mind for awhile, and I think it is dedicated to Grace. The drought has punished much of the garden this year, but the heat has blessed the magnolias. They have always been fussy, filling the long hot summer days with the sound of cast off leaves and scenting the air with guilt (is it something I did? More water? Less? More Mozart?) This year the magnolias have bloomed in a profusion of luminous tiaras, each one unfolding at breath-taking speed. I have been photographing them since June, in all their stages from bud to full reign to the fragile papery origami the color of tea.

This print and many others can be found on my new shop, launched this month. You may view my available work on Etsy or through the direct shop link here on my site. I am very excited to become part of the Etsy community. The new interface is spacious and well designed, and offers a lovely platform for artists to present their work. At my shop you will find a range of work inspired by both the garden and architectural themes, at a wide range of prices depending on the size of edition and the print. In the future I may also offer paintings as that work develops.

This coming First Thursday I will have work at Galvanize, as part of the opening in drizl‘s new physical gallery space. Galvanize is a stunning new co-working, learning and meeting space in Pioneer Square at 111 S Jackson Street, Seattle, 98104.

Save the date (and register early, this will be popular!) for a panel discussion on Tech and the Democratization of Art, hosted by Crosscut Arts Salon at Galvanize. I will be part of the discussion, which should be lively, details coming soon.

A note to subscribers: I have recently consolidated my newsletter mailing lists and blog subscriber list under Mailchimp. As a result some people maybe getting the newsletter twice. Or you may have thought you signed up only for show notices and are now receiving blog posts as well. Please do take advantage of the subscriber preferences form and update your preferences so your inbox has only as much from me as you wish.