You are here: Home / Archives for Chinese snuff bottle print

This time of year the pond is dizzy with dragonflies. They hover in a cloud of iridescent blue, migrating from the waterlilies to the yellow poppies, and I have even seen them in the house, poised over the threshold of the front door. When I found the body of a checkered dragonfly on a lily pad last July I started this piece, which is now in its 17th iteration. Maybe you call that a …..”series.” Collage is the art of decision– and indecision. It is the ultimate practice of impermanence, as any element can be moved at any time to create a new shift in perception. If, in your own dragon-fly hovering, you begin to doubt and become anxious for resolution, you lose sight of the wonder that illuminates the process. I am influenced lately by a provocative book by Leonard Koren, Wabi-Sabi for Artists, Designers, Poets and Philosophers. I read this when it first came out in 1994, but had not consciously thought about it for years. The new edition includes black and white photographs that elucidate each premise with quiet and subversive elegance. This passage uses the garden as metaphor, but could as easily refer to making art or any other creative endeavor: All things are incomplete. All things, including the universe itself, are in a constant, never-ending state of becoming or dissolving. Often we arbitrarily designate moments, points along the way, as “finished” or “complete.” But when does something’s destiny finally come to fruition? Is the plant complete when it flowers? When it goes to seed? When the seeds sprout? When everything turns into compost? The notion of completion has no basis in wabi-sabi. Of course, Edna St. Vincent Millay also said, “To create one must decide.” And the challenge is to hold both truths and not go crazy. I find it helps to work until midnight, when things get very quiet, to a certain kind of music. The artist of the snuff bottle, on the other hand, had not the luxury of indecision. Bottles like this one were painted with tiny brushes from the inside of the bottle. Ponder that feat of execution next time you think you have a technical challenge. 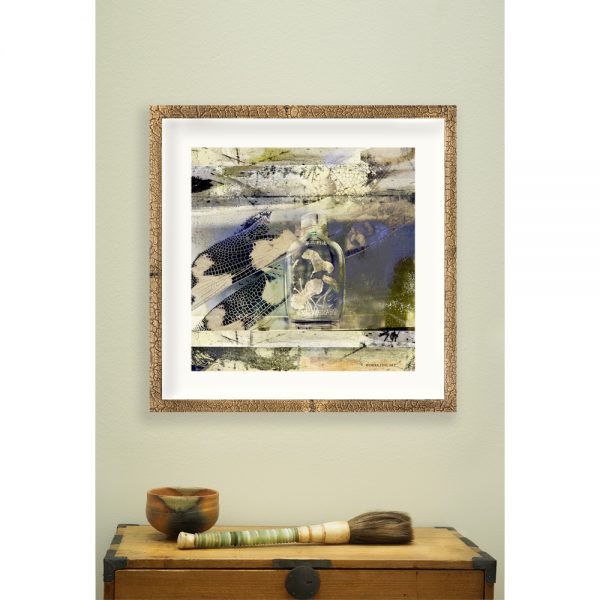 Soundtrack: Darshan Ambient, anything by Michael Allison. Or Catching Up to You. Or Sidney Ji’s meditative Water Sines.