You are here: Home / Living With Art / The Patra Passage Opens to the Public, Museum of Glass February 15

It’s hard for me to believe, but it has been a full year since I attended the launching of the Patra Project and received the gift of the patra, the exquisite bowl gifted to me and 108 other people on condition that within three months we pass it along to someone else. The past year been a time of big changes for me, and the energy of this extraordinary project by artist Lynda Lowe has permeated my life in many ways. (You can read about my experience of the patra here.) I passed my patra on to photographer Rosanne Olson, and this is what she did with it: 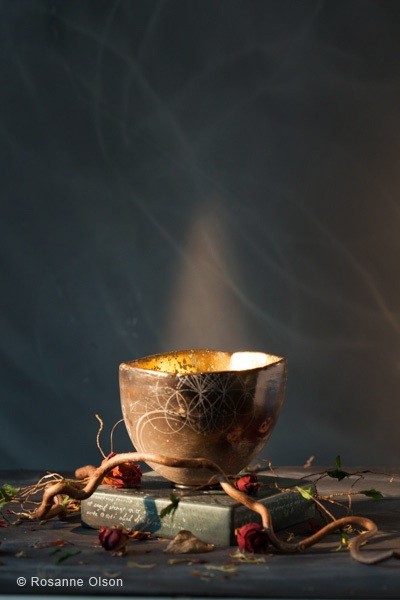 She also took it down the Grand Canyon on a raft: 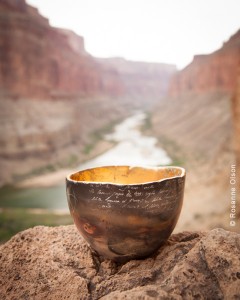 …and it did not break. Other bowls did break, and all along Lynda has seen that possibility, and prepared herself for the repairs, which will be as beautiful as the original objects. The art of Golden Repair is a form of spiritual practice in its own rite, beautifully written about by Michael Meade in a recent piece in the Huffington Post , excerpted here:

“While anguishing over reports of both cultural and natural tragedies I keep thinking of the old Japanese practice of kintsugi or “golden repair.” The idea behind this ancient ceramic art includes the sense that when something valuable cracks or breaks it should be repaired carefully and lovingly in a way that adds to its value. Thus, the cracks and fault lines in a valuable bowl would be filled with a lacquer made of resin containing powdered gold. Such a golden repair does not try to cover up the cracks in the vessel or deny the facts of the matter. Rather, the cracks and splits and broken places become filled with gold. Beauty appears exactly where the worst faults previously existed and the golden scars add to the living story and to the value of the container.

As a piece of “living philosophy,” golden repair suggests redemptive practices through which the damages of history and the tragic mistakes we make with the fragile vessels of both nature and culture might be repaired. Like any genuine process of healing and making whole again, golden repair requires that we first acknowledge and carefully study the exact faults and divisions that damage the shared vessels of our lives. If we see the globe of the earth as a living, sacred vessel that needs artful repairs we might imagine ways of helping it heal. If we could admit more readily to the tragic injuries that divide one group from another we could replace the bloody damages with golden lines that serve to remind us of the fragility of life as well as the possibilities of repairing shattered dreams and redeeming broken lives.”

This Valentines Day the bowls will be returned to the Tacoma Museum of Glass, where they were first introduced into the Patra community. The Patra Passage exhibit opens to the public on Sunday and continue through May 10. In conjunction with the exhibit there will be a talk, “The Mythologies of Beauty: from Aphrodite to the Patra Project” and book signing with author Phil Cousineau, Sunday February 15th from 3-4 PM.

I am looking forward to seeing what should be a truly beautiful exhibit. All vessels are for sale, and the proceeds go to support not-for-profit organizations and charity.

(Apologies to subscribers of this blog, I made a mistake in the first version of this post and the permalink was not good so I had to repost–you may get this twice.)