You are here: Home / botanical art / Iskra Fine Art #100DayProject and the Garden Show at Museo 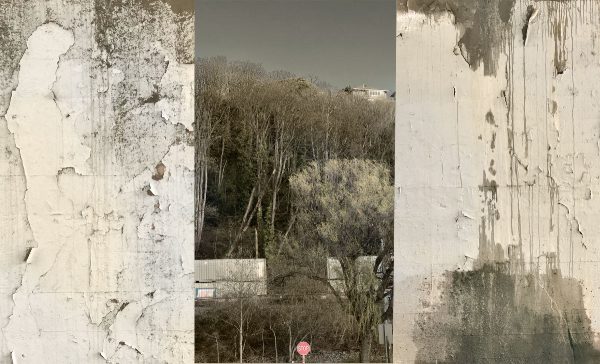 Anyone who has considered participating in The100 knows that choosing what to commit to for three months is a project of its own. After writing lists of ideas and walking around with them for awhile the phrase “The Space Between” surfaced. It was a beautiful – even glorious – day of sun and scudding clouds, but after miles of walking past people staring at the ground, muffled in masks and earbuds, and anxiously crossing the street to get away from each other, I felt impaled on alienation. Social distancing is the new architecture of public life. As I looked up at the hill above Golden Gardens the southbound train, moving through the filigree of spring trees with its relentless squealing, the grimy cars three feet apart and the stop sign poised below, seemed to encapsulate the jarring feeling of this moment. Everything that was “normal” has come to a stop. The Space Between encapsulates it all: it is a metaphor I can fall in love with.

This project will involve writing, video, collage and other media. It’s not about a brand, or having a consistent visual style: it’s about living with an idea and exploring how the framework changes how I see and what I make. The new media platforms available for photographers have challenged me to create in new ways, and one that has become a bit of an obsession is video collage. I came home from the walk along the train tracks uneasy and in need of release, and immediately sat down to work. The resulting collage opened dozens of new doors in my mind for how to think about space, related to sound, narration, poetry and movement. Also: connections. This week’s collages incorporate music from Kaley Eaton, who has created a striking new album called “Pandemic Journal” available on Bandcamp. After she posted a link to her work on a Facebook Covid-19 support group I bought the cd and asked her permission to use fragments as the background for videos. Celebrating a new hashtag here: #covidcollaboration(!). Wonder and beauty can come out of this difficult time as we explore collectively not just space, but its unexpected opportunities. 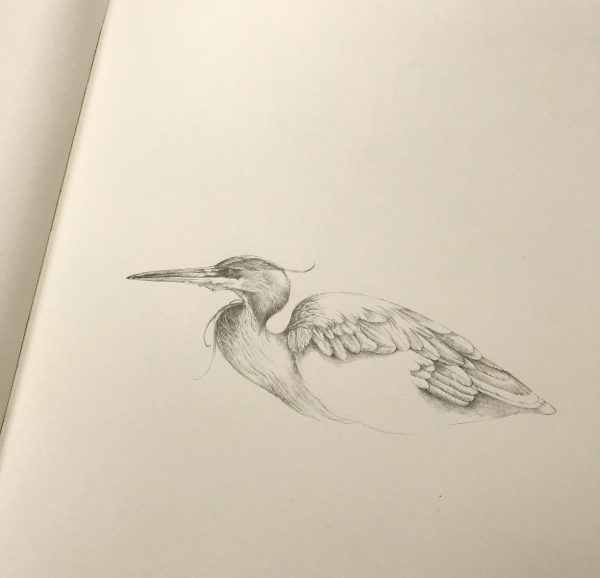 In the studio I am returning to drawing, where the white space of the paper has taken on a new meaning. Nearly 20 years ago the heron came to visit my garden. The first time he appeared I had just finished my morning meditation practice. As I rose from the cushion he rose from the pond, where he had been doing reconnaissance on my goldfish. As I looked out the window I was stunned at his wing span and the shimmering blue of his wings. He visited several more times that month and then vanished, replaced over the years by the occasional scrawny gray heron who, without any kind of grandeur, finished off my goldfish last year. Two days ago, as I was sitting down to reclaim meditation from the catastrophic news feed I saw a stirring between the slats of the Venetian blind. It was the Blue Heron, returned with new mating plumage, bigger than ever, and in a direct face-off with the homely and beleaguered gargoyle. Before I could blink he had caught sight of me, and flown, and I wondered if I had dreamed the whole thing.

I had been able to capture one of the heron’s earlier visits with my camera, and the edition of prints made from that moment sat in a drawer for 15 years. Only in the past year have three of the prints found homes, each with a story of remarkable connections. How uncanny that the heron should choose this moment to return. So many kinds of space in this: the space of years. The space between wings and sky. The space between people who meet unexpectedly after decades of distance. The space between strokes as a mark becomes a feather. The space of walking away to see the drawing clearly, the space between stillness and motion that is the heron himself standing on one leg. I will share more of this story and others as the 100 Day Project unfolds. I may be posting updates quite often , so if you want to follow along I suggest bookmarking, or visit me on Instagram, where I will be posting frequently as part of the #100DayProject community. The Iskra Fine Art newsletter goes out once every 3 to 6 weeks. If I start keeping a visual journal here of this time of #artinisolation it will be shared on the blog only to avoid cluttering peoples’ inboxes. 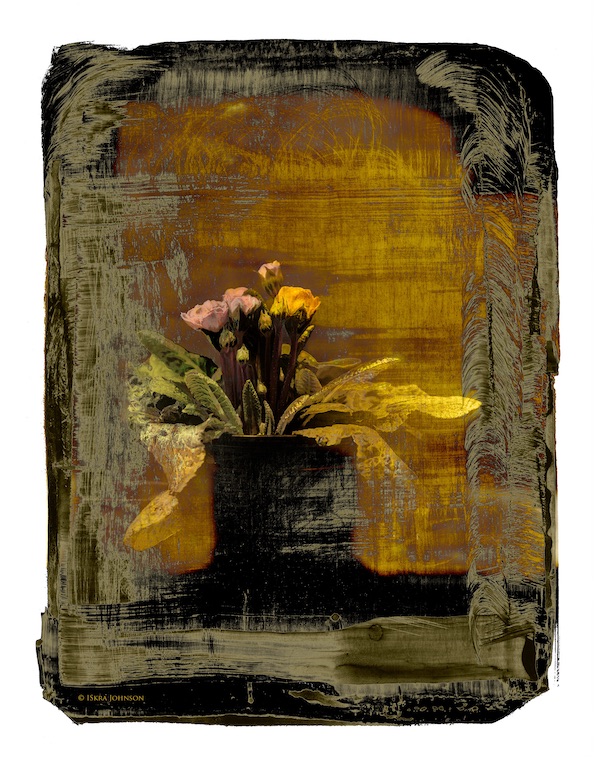 Meanwhile, The Garden Show will open at Museo on Whidbey on April 4th, although without open doors or the usual crowds. Above is my contribution, available framed or unframed through the gallery. To see pricing of unframed prints and images in situ visit my shop. The Gallery is closed until the social distancing period is over, but work is well represented on the website and visitors are welcome by appointment by contacting: museo@whidbey.com | (360) 221-7737 or (425) 443-1608. I will sign off here with a note from Nancy and Michael from the Museo Website.

“Here in the gallery, with beauty all around us, with paintings and objects made with intention and love, we find small reminders of all that we can still be thankful for. It’s calm in here, and that is soothing and restorative.

Each art object and each painting come with its own narrative that gives art it’s weight. A story that begins with the creator, who had the need to express something, and then the life the piece has after it has been placed in a gallery, or in someone’s home.  That story, that life, most likely has nothing to do with us washing our hands for 20 seconds (although the creation of art can, at times, be a messy endeavor), not touching our faces, or keeping our “social distance”, that in and of itself, feels freeing. Not a distraction, as much as a therapeutic rest for the chaos of the world, and a journey that requires no plane tickets, or a touch that requires no contact, or a celebration that requires no crowds.

We welcome you to come by for a little art therapy.  We would be happy to arrange private viewings with take-out from a local restaurant, in-home consultations, or any other special accommodation.”