You are here: Home / Iskra Shows, Upcoming and Past / Northwest Mystic Summer

Yet, here I am, indoors, attempting to translate the outdoors after recent travels in landscape. The new work for SAM Gallery’s November show “Artists Influenced by Asia,” is directly influenced by the immediacy of nature here along the Salish Sea. A few weeks ago I went up to Samish Island with two dear friends, painters Chris Gedye and Patty Haller to see Patty’s new studio. It was complete bliss. We woke up in the morning to low tide’s iridescence, herons perched sentinel along the sand and wind stirring the branches of trees along the bluff. Off to the west was an island I’ve never seen from this perspective: Lummi, looking imposing and grand. Years ago I lived there from time to time but I never thought of it then as a mountain. My view was ground level, orchard, middens, the road to the cemetery. I stayed in a yellow farmhouse perched above the harbor and the chants from Indian canoes carried across the water and into the kitchen. Rose hips on the windowsills and light bouncing on the yellow walls so that even in the rains it seemed like summer. Day began with the ferry’s drone and the shriek of bald eagles hovering in the trees. I would sit on the steps with a cup of dark black oolong tea and wonder if happiness could be anymore pure. How astonishing it felt to gaze from the present into the past from another island.

Landscape is its own language, one I have never been taught, and I gain a great deal from watching my two friends paint. It is from them that I have learned the exquisite patience of leaves and twigs, the trial by fire that is trying to capture fog and air, and the mapping of space around foreground and background. Being out in the Skagit Valley with painters got me thinking of the Northwest Mystic School and the artists who gathered in the area, influenced by Asian aesthetics and the landscape, in the 1930’s through the ’70’s.  One of my early calligraphy teachers, Steve Herold, and several of my painting teachers were part of the community in Fishtown. I never got to this mythic artist haven, but the stories were legendary. Chop wood carry water was quite literal, and Steve would complain that after a week of chopping wood at the cabin he couldn’t hold a pen. Much of the world is losing its sense of place, but there are still true places here where you can see history, trace a lineage, and continue it, inspired by the same source.

Sometimes I work very quickly, and ideas pour out one after the other, with little time to think in between. The new work is different. It is slooooow. Thank you Mr. Roethke for understanding this, because it is what it is. Many people think that by it’s nature digital art and photography are quick (and easy.) But digital media can take just as long as painting. You think a piece is done, you walk away, look at it upside down, cry, and start all over……It’s perplexing to start with an instantaneous capture with a camera, and then to spend weeks revisiting the moment, layering and unlayering, looking for something either as real, (or more real) than life. These pieces are created from actual physical paintings blended with photography, rather than the found surfaces that I sometimes embed in my work. The paintings I do quickly, in samurai mode. The photographic merging is deliberative, gradual. As I take a scene apart and reconstruct it layer by layer I have been thinking a lot about my years of painting in sumi, and the delicate shadings of a line. And I will always wonder, what would Hokusai have done with an Ipad??

Anyone who walks around Greenlake knows the Heron. He is always in a thicket, and the branches seem to arrange themselves inconveniently, with the kind of random, merciless chaos that can take days to unravel. I may yet reorganize this, but for now, give or take a broken twig, this is where he lives.
If you are interested in seeing work in person give me a shout. I have showings of my work here in the studio several times a month by appointment. A selection of prints can also be seen now at Museo on Whidbey Island. Happy summer travels! 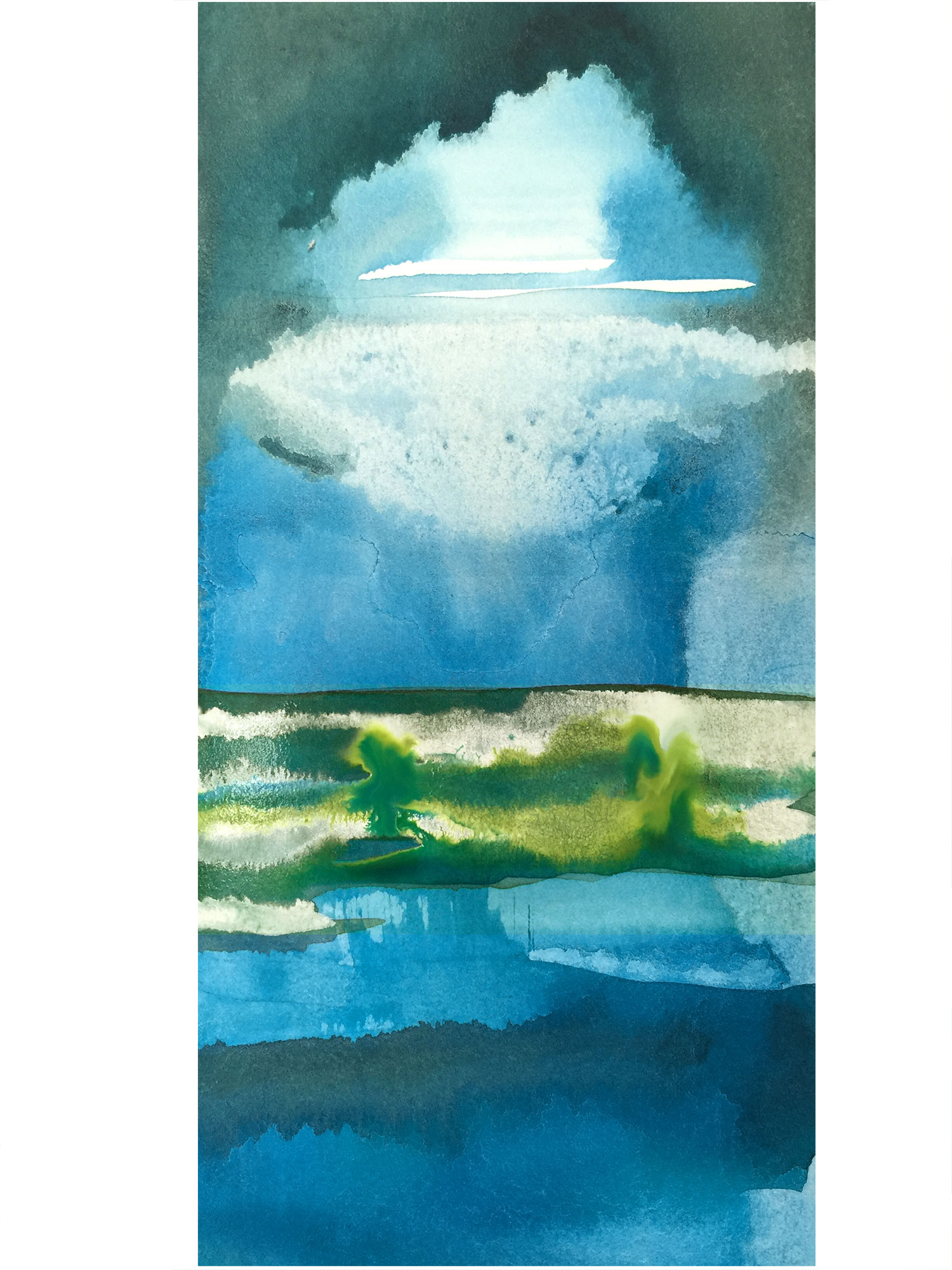