You are here: Home / Archives for artist studio visits

A few weeks ago the Port of Seattle came to my studio to interview me about my work, and the result, “The Beauty of Usefulness: Maritime Industrial Art” is on their website now! I haven’t seen myself on video since I was umm, home movies on a swingset in a onesie? – so this was pretty unnerving. I wish they had given me a beer and reminded me to smile. . . . But I am so thrilled to be able to show my work in depth with a new audience and talk about the connections between industry and art. They asked some very interesting questions not often posed to an artist, giving me an opportunity to think and share in depth what is behind the surface of what I do. I hope you will take a look, (here’s a glimpse of the videos) and let me know what you think!

In other art news, Color Bath will be coming down a week early due to a schedule change at SAM Gallery, so I hope you will try to make it in by October 28th to visit Taste at Seattle Art Museum and see the show. The Color Bath series will continue to be available through the Gallery after the show comes down.

The group show “Terrain,” at Museo until October 28th, is just beautiful. One of my pieces in the show is still available, so get on up to Whidbey and see it while the sun is out and the weather is at its Northwest best. While I was on the island for the opening I had a chance to return to some of my favorite places and do some shooting. I am completely mesmerized by this new way of collaging still and moving images. It maybe low resolution on your monitor, but I hope the contemplative moment comes through.

She has led many lives, far beyond her small-town roots, as part of the Peace Corps in the Phillipines, as a mother, a poet, and as a painter and teacher in Japan, Alaska, and the deep South. By the time she landed back on the West Coast she had a wealth of artistic influences to draw from. Her assignment for the Ruins was to create a style of “Northwest Rococo,” and every detail of fauna and flora is researched and authentic, drawing on a year of research into painting styles, ornament, and museum artifacts and diaries from the early days of the Northwest Territories. END_OF_DOCUMENT_TOKEN_TO_BE_REPLACED

In the beginning, which is to say about three minutes ago, after the invention of the wheel but before there were scanners and i-phones and computers, there was the book, the magazine, and the scissors. And there were people who collected stuff, and cut it up. The word “de-clutter” had not been invented, and you could still find magical things in fleamarkets, which had not yet been scraped bare by scavengers from Ebay.  There were people who didn’t live to throw stuff away or shrink it to a thumb drive, they lived instead to adore the object, to gather ephemera, to let all the fabulous detritus of culture float about them and settle into new order. In this way was born the art of modern collage. Friday I was privileged to spend a morning visiting the studio of one of the very best collage artists of today, Richey Kehl. 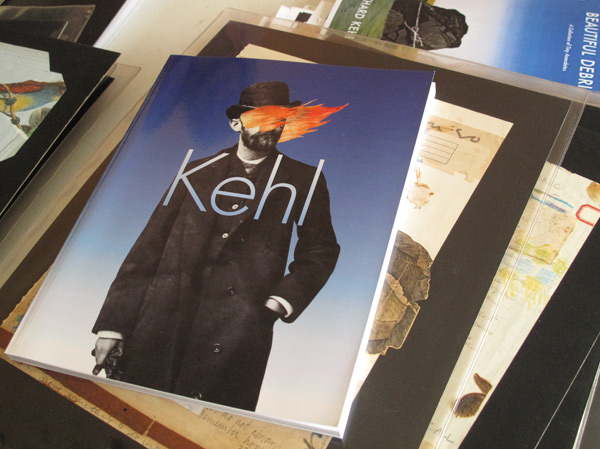 I put him in my personal pantheon of the collage greats, with Romare Bearden and Tadanori Yokoo. Kehl’s work is nostalgic and elegiac, exquisitely decorative, but also dizzying in its leaps of association. I studied with him briefly when he taught at the University of Washington, and will never forget his epic slideshow. A kind of whole brain-boot-camp experience, this transcendent hour in the dark with yes, a slide projector, inhaled you at one end as a rational if anxious student struggling just to “learn how to paint” and spit you out at the other end almost enlightened. The seemingly random image sequences had no explainable logic, and yet stirred your unconscious to a sense of exhilaration and purpose. You would not see things the same way again.

I have often wondered how a dedicated collage artist copes with The Stuff. Is there a system? How do you arrange your workspace so you don’t go completely out of your mind? Do you have a method to the madness? If you are Richard Kehl you buy a house, and turn the entire structure into a living breathing library of books, objects, ephemera and eternal work in progress. Each object and image is honored and tended, with the understanding that it is on a path to relationship with other objects and images that will make sublime sense. 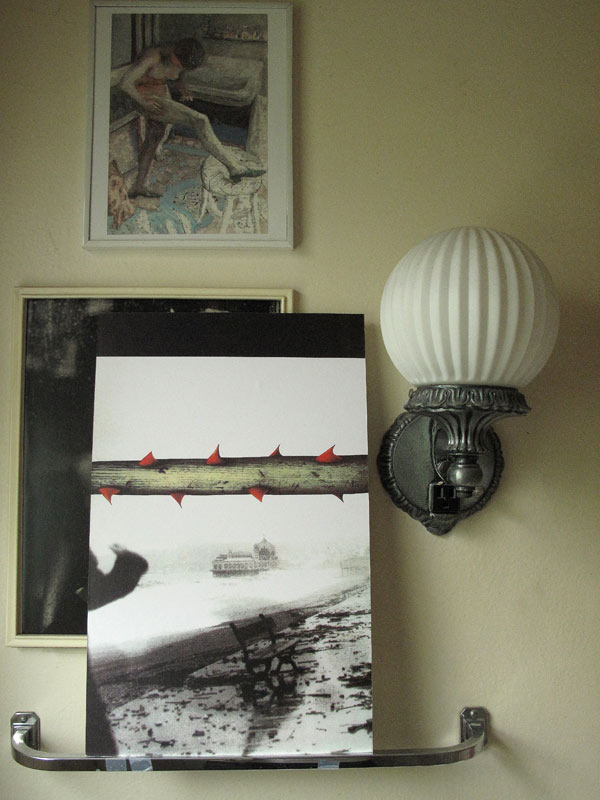 You honor books with as much love and attention to indexing as the Library of Congress, with entire rooms of the basement dedicated to outsider art, Japonisme and photography. “I got rid of all my books once. And then I had to buy them all back.” 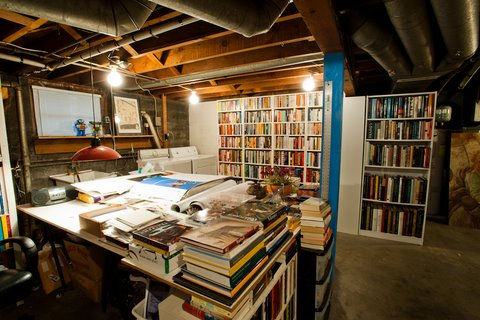 And who needs dishes? You keep your poetry in the kitchen, for whenever hunger strikes.

This encourages your friends to respond in kind. With me on the studio visit were Joe Max Emminger, Lana Sundberg and Julie Paschkis, seen here wearing a poet’s coat. 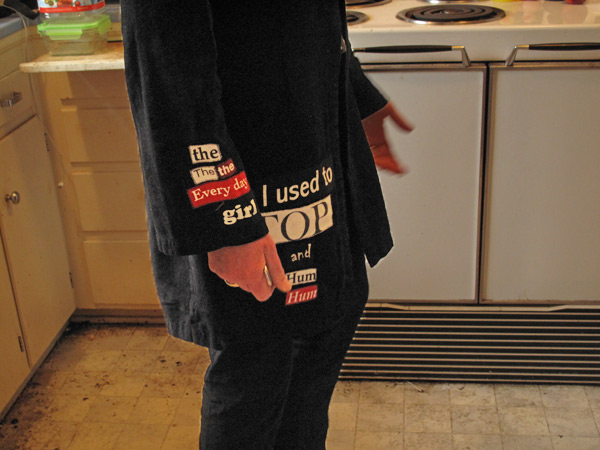 In answer to the question of all those little bits of paper: you have a bank. Stacks of foam core board hold hundreds of images, collage in waiting. 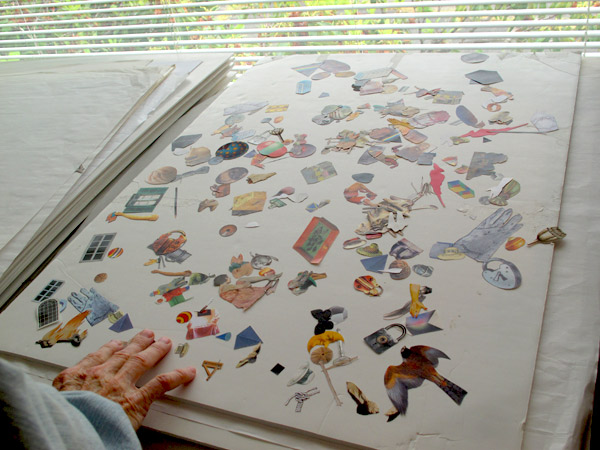 “I have nothing to do with it. I wait for them to tell me where they belong and what to do next.” 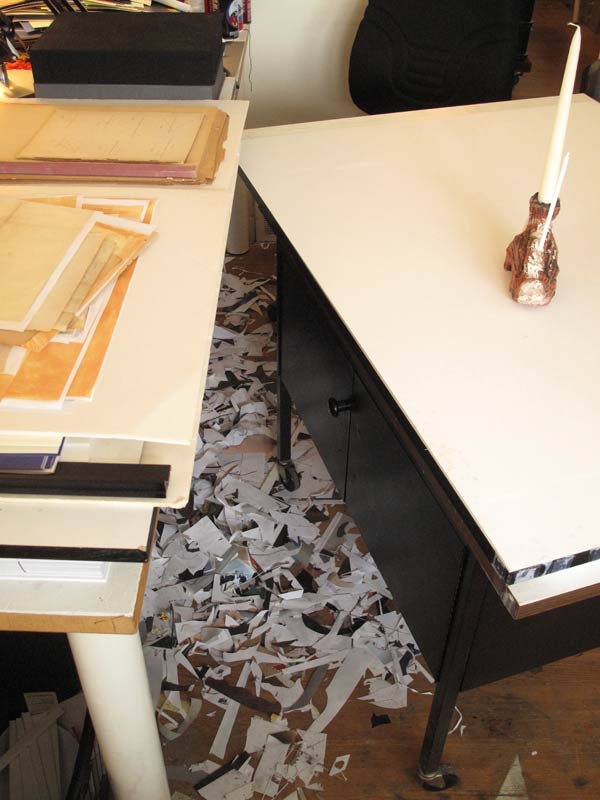 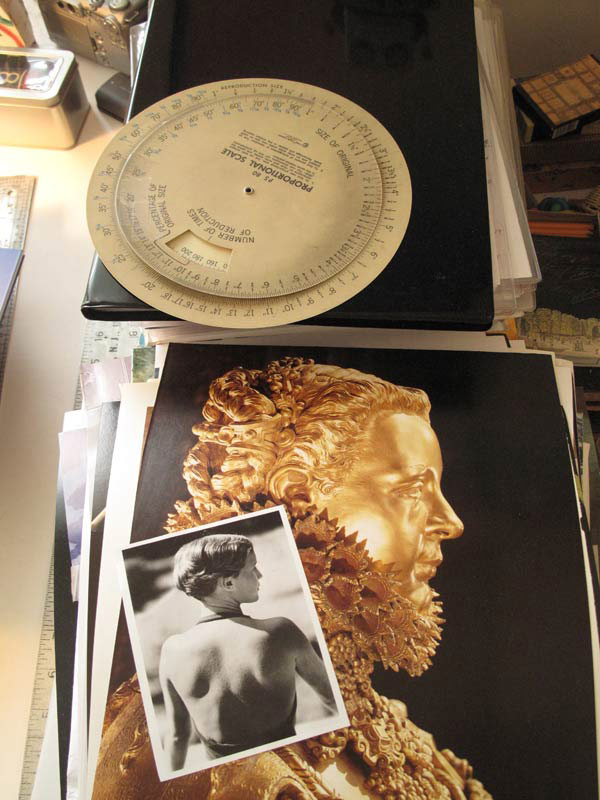 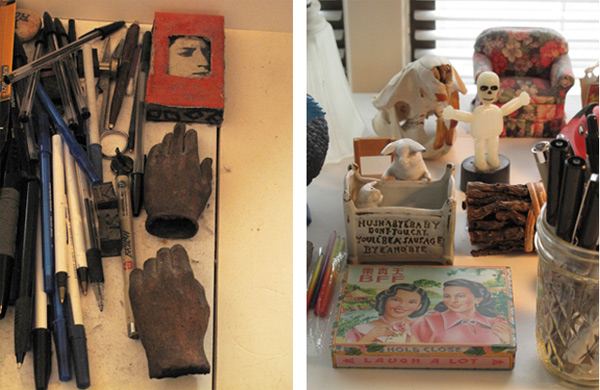 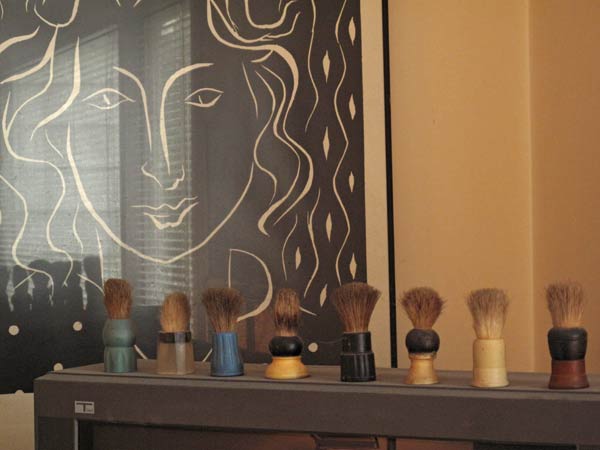 Two of Kehl’s enduring themes,  The Masculine and The Feminine, seen above in diorama. 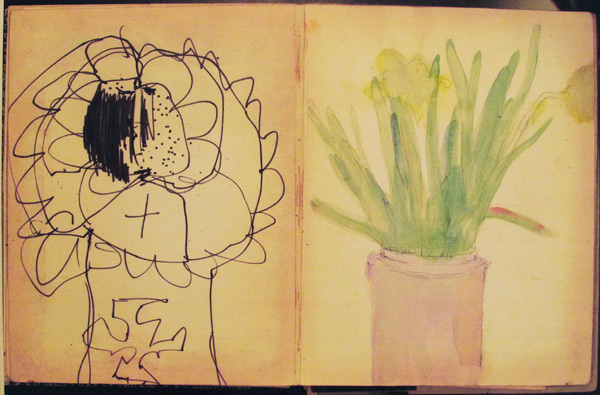 An early collaboration in a framed sketchbook page, a drawing by Norman Laliberte on the left, and Kehl on the right. 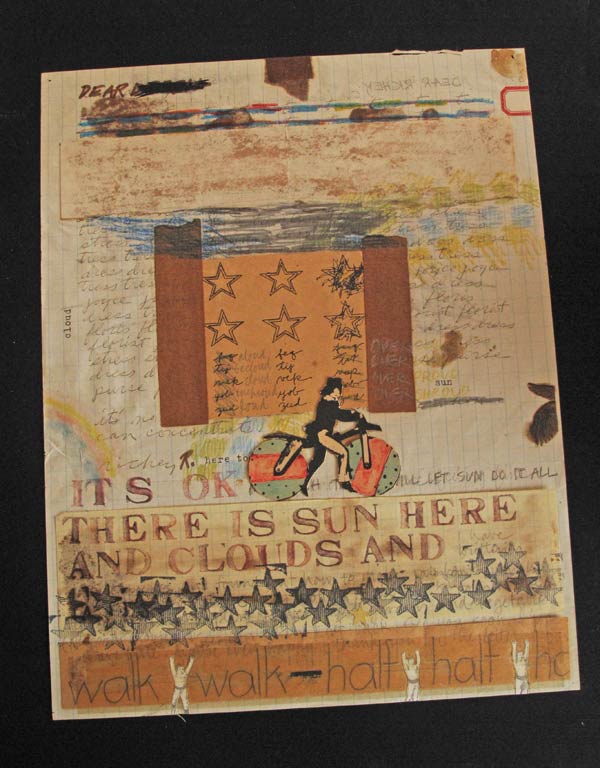 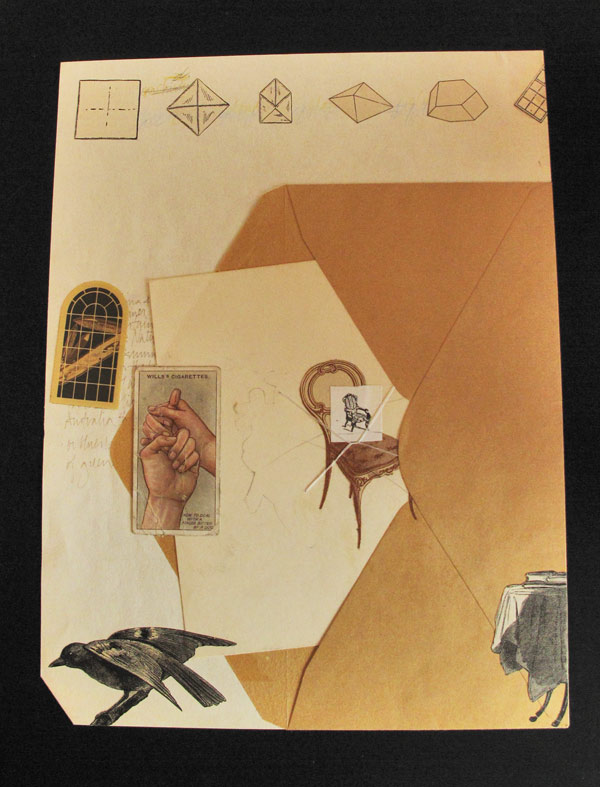 In the late ’60’s and early ’70’s a whole language of collage was developed by people like Richey Kehl, working in concert with poets, visual artists and kindred spirits. This was the beginning of mail art, magical talismans hand-cancelled and sent back and forth to be elaborated upon and transformed and challenging the idea of what is “mine.”

Below, some of the Kehl’s newest work. I look at these and feel like I am seeing a combination of chess master and Merlin at work, at the height of his alchemical powers. All collages copyright Richard Kehl, used by permission of the artist. 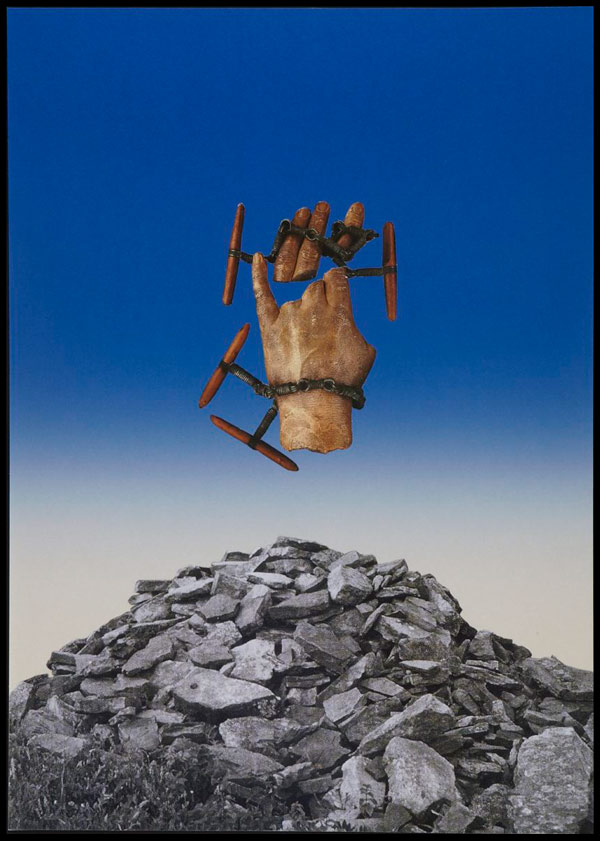 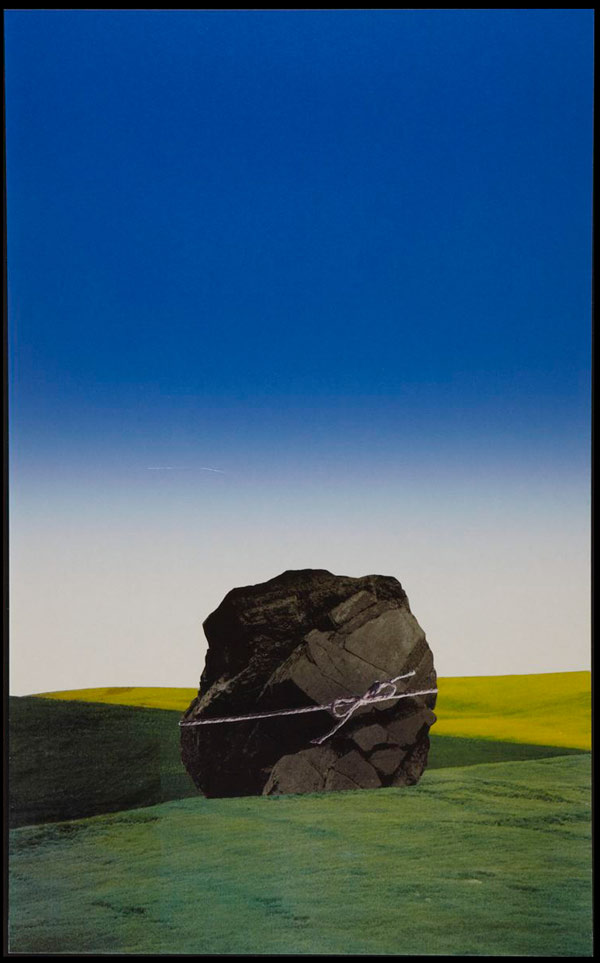 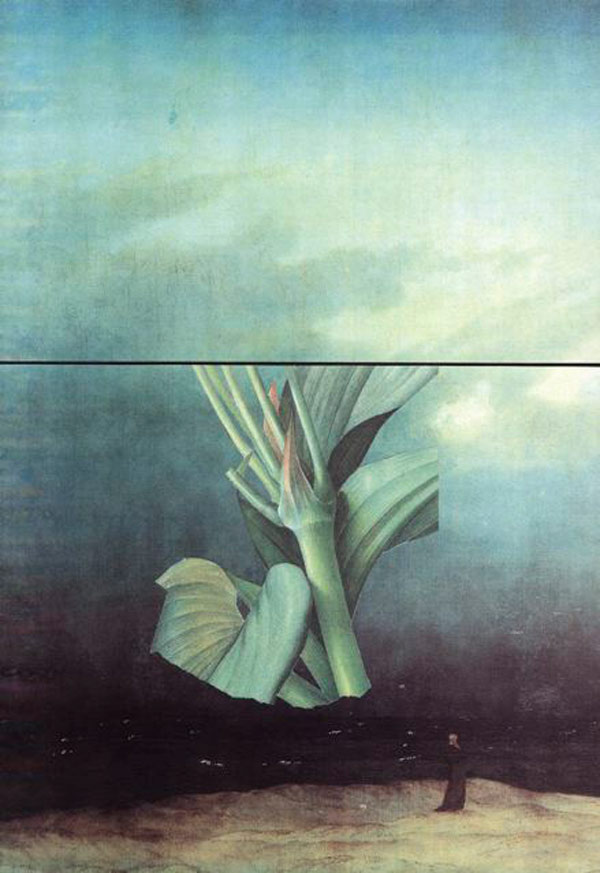 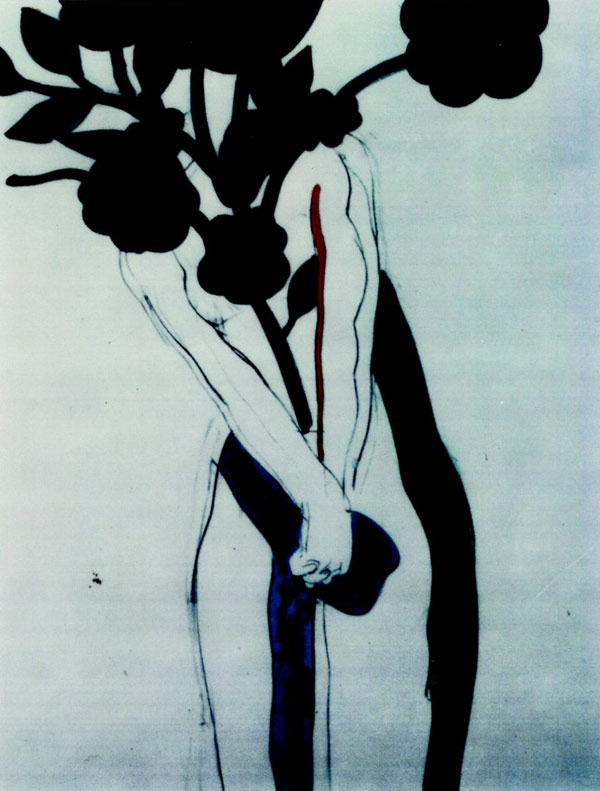 I am ending with this last drawing which comes from a much earlier era. A pure drawing that holds all the elements that I love in Kehl’s work. Thank you Richey, for your brilliance and inspiration.