You are here: Home / Search for "excavations" 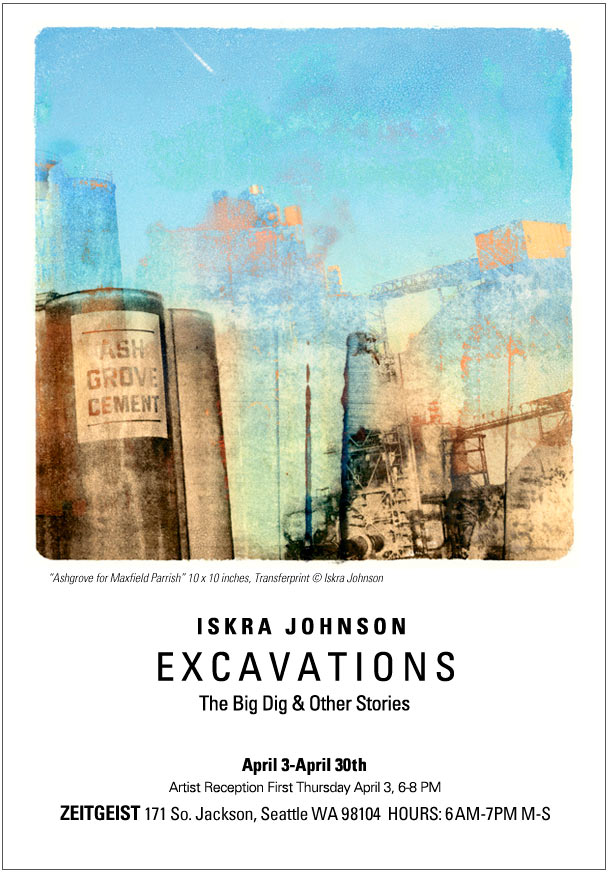 Here is the official cyber-invitation to my show at Zeitgeist opening First Thursday, April 3 from 6-8. Hardhats optional. No host bar (Zeitgeist serves beer and wine). Feel free to print and share!

Blending traditional media with digital photography, the exhibit offers a personal homage to sense of place in the wake of Seattle’s relentless building boom. Ranging from depictions of the Alaska Way Viaduct to construction sites and iconic ruins, these prints explore the paradoxical beauty of disruption. Many of the images are composed from walls that have been painted over or destroyed in the past year. Others incorporate the ragged surfaces found on construction projects and in the streets, in a collage of photographic, drawn and painted surfaces. Read more about the evolution of this body of work and preview pieces here.

I am excited to be part of the Building C Open Studios this year, courtesy of AJ Power, who is hosting me as a guest artist in his studio on the second floor. I adore AJ’s work, and have had one of his magic bird images hanging on my wall for years. Building C is located at Leary Ave NW & 14th Ave NW in Ballard, “the big brown warehouse across from the Ballard Office Max.” Ample parking in the adjacent lot or on-street, enter on 14th Avenue. Building C is a hive of talent in many media, including painting, ceramics, jewelry and clothing from 24 artists. Open Saturday, December 4 from 12-7, masks required.

I will be showing work from the last two years of explorations in collage, photography and mixed media, as well as some brand new pieces. Most of the work has never been publicly shown outside of my blog or Instagram. I’m curious to get your eyes on it and see what you think! 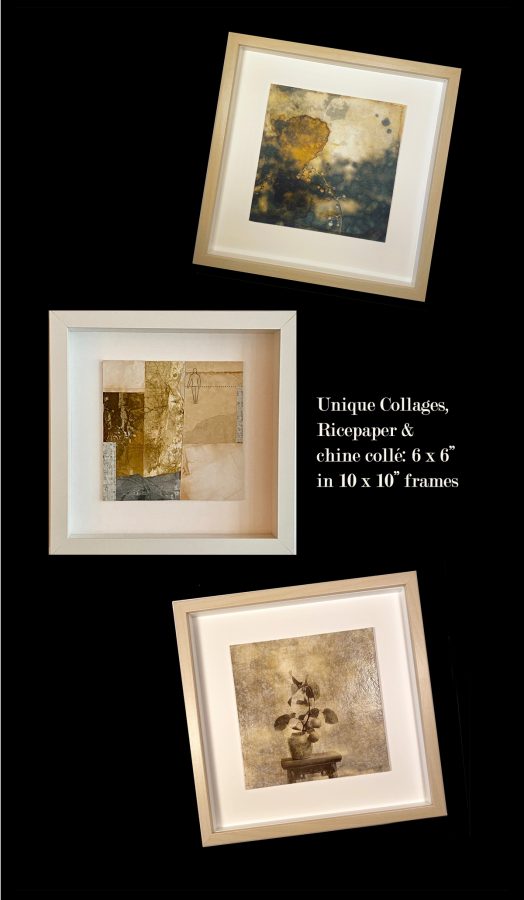 I have had requests recently for small works for gifts and small spaces, and so this year I am trying something different, with a new selection of framed pieces ranging in size from 6 x 6″ to 12″ as well as limited editions of prints on 13 x 19 and 8.5 x 11. For those who missed previous open studios where I offered my Venetian plaster botanicals, the remaining pieces will be here as well. Unlike a thematic show this is a chance to see every non sequiter and direction my artwork has explored, from the amber moods of the Sweet Old World to the blazing color and disrupted space of my architectural and maritime work. Below is a tiny sampling.

END_OF_DOCUMENT_TOKEN_TO_BE_REPLACED

Contemporary photo collage that examines the beauty and structural underpinnings of the industrial environment. Many of these images come from the Pacific Northwest harbor and waterfront, and were created for an exhibit called “Excavations: The Big Dig and Other Stories” that captured the last years of the Alaska Way Viaduct before it was taken down. The first set shown here are transfer prints, unique mono prints in small variant editions. (Read more about this process here.) The others are limited edition archival pigment prints on rag paper, variable sizes. Some sizes have sold out, inquire if interested.

I have just completed several of the final new images for the upcoming “Excavations” show at Zeitgeist. One portion of the show will be a series of 10″ x 10″ transfer prints devoted to the ongoing saga of the Alaska Way viaduct. The images are created from my photographs of the viaduct layered with painted and drawn surfaces made in response. This is a place filled with industrial strength beauty: loud, dirty, sometimes hazardous but always provoking.

I have been photographing the viaduct for at least 25 years, and this iconic structure is an enduring object of affliction. Many of the collages are based on recent cellphone photos taken from a moving car. This is the glimpse, the rapture of the vista, the overstory. But this one, the most recent piece, uses as its backdrop an analog photograph I took over 20 years ago when the train tunnel could still be seen. I stood for hours one long gilded afternoon waiting for trains, and documented the graffiti as it changed color in the refracted sunlight of the bay. Now that tunnel is invisible, walled in behind condominiums. This is the understory. As with all of the images in this series reality has been subtly collaged and reconstructed.

Meanwhile, although the cracks are getting larger we still drive. Best view of the sky anywhere:

Each transfer print originates from the same image, but the transfer process creates a unique monoprint each time, with different surface qualities and subtle variations in color. I often make only one print of an image, but in some cases the variations possible are too interesting to pass up. This particular print has several variants, as I experimented with the grain of the ink and application of the transfer medium. In this version I “wiped” the paper as I would a zinc plate, to get the organic washed quality of the sky.

Mark your calendar for the opening, First Thursday April 3rd, 6-8 at Zeitgeist. A reminder will come closer to the date.

I am hard at work on my series of prints about the Alaska Way Viaduct. Big Bertha, our sensitive and emotionally overwrought digging machine is helping me out by quitting on the job. We may have several extra years to contemplate incipient ruin, the subtleties of patina and the beauty of going nowhere.

This morning I started on a new collage with Pandora in the background set to my favorite station, which I am guilty, guilty, guilty of listening to instead of finding each song individually or listening to mixtapes made by friends 30+ years ago. The station, wouldn’t you know, is named for the father of music for airports Brian Eno. I do like this phrase from the Rolling Stone review of 1979, “...there’s a good deal of high craftsmanship here, but to find it, you’ve got to thwart the music’s intent by concentrating.” The trick of collage is often to concentrate while not concentrating, a sleight of hand through which something interesting may appear. Mr. Eno and his friends are the perfect soundtrack to encourage this state of mind.

As I was working, shifting layers back and forth and on and off and testing all the ways two simple images can converse and transform each other, I thought about driving and the visual emotional space of the car, which is so entirely married to music. I got my first and only car, a gray Toyota Corolla, in 1989. I will never take it for granted. The first time I sat on a lookout at sunset and turned on the radio I had a kind of American Satori experience: so this is what they were talking about! I get to sit here in my room on the street and just turn the dial and look out at the view?

The view of course is what the lovers of the viaduct will miss the most when it comes down. It is the last populist vista, where you don’t have to pay big dollars to see The Mountains and the Sound which make us want to live here. When it is gone we will have to buy a multi-million dollar penthouse condo or use binoculars to peer across the six to eight lanes of traffic they propose to go on top of the tunnel, which by then will cost 10 dollars per trip and which no one will use because who wants to drive in the dark?? Hmmm.

The music of this situation is both requiem and anthem, weaving its modal intervals in and out in lane changes and near-misses and ultimately onto the great offramp of what-it-is. Requiem for what is to be lost, anthem for what we can still see if we ditch our worries about gas and earthquakes and just go for a drive. I checked Pandora to see what lovely song was transporting me: “Ballad of Distances” from The Tired Sounds of Stars of the Lid, and “Requiem for a Dream” by the Kronos Quartet. Gotta love this many-splendored synchronistic modern life.

Stay tuned for details on my upcoming show, “Excavations,” at Zeitgeist, opening the first week of April.